First, I start by creating the answer to the Sudoku.
So first, I create the answer, then leave random blank boxes, and if I can solve it, it becomes a valid Sudoku problem.
When I was searching for information, it seemed deciding the blank boxes first then filling in the numbers was a better way to create more sophisticated problems, but it was quite difficult so I used this method. But I made a few creative adjustments in the process, so the blanks are not random. 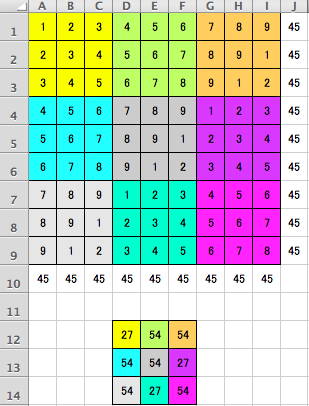 Creating an answer is not so difficult.
You can use existing answers or create one from scratch. As shown in the diagram above, fill in 123456789 so it doesn’t overlap horizontally or vertically. The total of row J and column 10 are both 45. But the 9 yellow boxes total up to 27 and the numbers are overlapping as well. 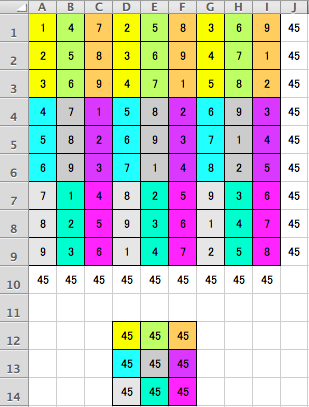 Then, move them as shown in the diagram above to create a valid answer.

You can replace 3 numbers at a time in columns or rows.

You can swap an entire row or column as well

Shuffle the answer using the rule above.
By shuffling the answer, you can create as many variations as you wish. (I wonder how many combinations there are.)
In this website, I start by creating the answer to the Sudoku.

Next: Create the blank boxes of the Sudoku